“An opportunity for humankind to rethink”. These words from Jacky Bryant, Minister of Environment of French Polynesia, show a pretty distinctive idea about climate change. And we liked to hear this from someone with such responsibilities!

A Plan on Climate Change, for the whole society to think sustainable

As with most of the countries in the Pacific, the overseas country of the French Republic (Pays d'Outre-Mer) has a high vulnerability with regard to climate change. French Polynesia is composed of several archipelagos, with small and mostly low altitude islands, and where sea level rise and cyclones are ones of the greatest threats.

When we met Jacky Bryant at end of February, he and his team were preparing a significant two-months task : several workshops taking place during March and April, with the final objective to draft a Strategic Plan on Climate Change (Plan Climat Stratégique). Each workshop deals with a specific sector and gathers the corresponding local socio-economic actors : transport, urbanism, energy, ecosystems, etc. The main purpose of the Strategic Plan is to issue recommendations and guidelines for a global sustainable development of the country. It will be adopted as a national development policy and taken into account on other government programs. 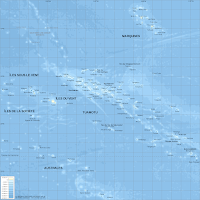 French Polynesia is made up of 5 groups of islands : the Society Islands, the Tuamotu Islands, the Gambier Islands, the Marquesas Islands and the Austral Islands.
(Picture : GNU Free Documentation License)


When we asked the Minister how French Polynesia makes its voice heard during international discussions about climate change, he replied : “French Polynesia lies on a 5 million square kilometers maritime surface. This is larger than the whole European Union. The natural resources are numerous, but here you will have to look below the ocean to see them! For instance, the undersea grounds contain lots of rare earths, which are nowadays the subjects of strong economic and strategic interests.”


The rare earths contain the elements required in the manufacturing of our mobiles phones, TVs, other electronic equipments and also green-energy technologies. Today China produces more than 90 per cent of the world's supply but takes advantage of this position. Recently European Union, USA and Japan have launched a joint complaint against China before the World Trade Organization, denouncing China's limits on its exports of rare earth metals.

“Another example is the fish resources”, Jacky Bryant adds. “There is an area north of our Tuamotu archipelago where tuna reproduce. The huge quantities of tuna in this area make it very valuable and fishermen from all over the world would like to come and fish there.

Jacky Bryant comments : “Chinese and Russians for instance understood the values of the Pacific waters. This is why they have started to invest in some countries, without any compensation, building stadiums for free for example. Long term investments to ensure them a position in the Pacific…”

“We know that climate change will result in several kinds of difficulties in the future. And we try to get ready for that”, says the Minister. “For instance, we have in mind which islands could be the destination of a possible migration of people, due to sea level rise. This destination would be the Marquesas Islands, North East of French Polynesia. These islands have higher altitude lands and lots of these lands still belong to the State.”

Jacky Bryant adds : “I am convinced that the future changes represent also an opportunity to correct and to re-think. Lots of components of our society have to be rethought. Sustainable development must be part of all actions and changes should also be the occasion to improve. Let’s take the example of tourism in French Polynesia : today we offer mainly seaside tourism, tomorrow we should also promote a cultural tourism”.

The tourism is the first economic sector of the country and represents around 25% of local gross domestic product (IEOM, 2008). Nevertheless French Polynesia is mainly a seaside tourism destination. It is often associated to white sand beaches and turquoise waters! The Minister explains : “There is a strong archeological heritage to protect and promote. This is why I am in favor of creating a university diploma in archeology, which for the moment does not exist here. Our cultural and heritage sites are located in coastal areas. On the one side, climate change will have an impact on the seaside tourism and on the other side, it will imply adapting the coastal infrastructures : French Polynesia needs qualified people to control and go along with it!”


In a previous article, we mentioned that Maldives is trying to buy land in Sri Lanka and India as anticipation to possible relocation of the population due to sea level rise. Recently Anote Tong, President of the Kiribati in Central Pacific, recognized that there is an ongoing discussion with the government of Fiji, in order to buy land there. Kiribati has already started to see its coasts taken by the waters, mainly due to sea level rise and erosion, and has no other choice but to prepare a migration of its entire population, 113 000 people.
~~~

Journalists followed us while we met Jacky Bryant end of February. This is the news report, by the French Polynesia TV channel TNTV.

Welcome to the
One Climate One Challenge
Episode I blog!
A worldwide testimony about climate change...

Get the paper book !

Articles with the label...

One Climate One Challenge